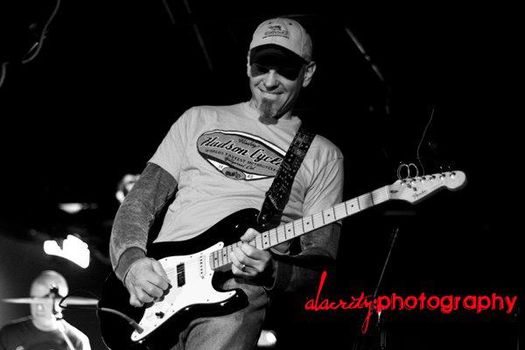 The beginnings of LEADING THE BLIND can be traced back to the early 1990s, with Marty Paschke honing his playing and songwriting skills while cutting his teeth in Northeast Wisconsin’s Fox River Valley with the Crocodile Nasty’s. After the sudden end of TCN, Marty then gave birth to the band BLIND in 1999, gigging across the region and recording a couple of albums to glowing reviews with Keif Shaw on drums and Jim Van Hout on bass. After the demise of BLIND in 2001, Marty continued writing songs, waiting for the right time and lineup to present itself...and present itself, it did in 2008. Recruiting his former Blind bass player Top Jimmy and drummer Patrick Wydeven (Pawnshop Lifters, A-Town Unplugged), LEADING THE BLIND was born – reworking old Blind material while working on new ideas. Enter 2010, and the addition of Eric Krueger (Sunday Flood, Hallorann, Old Nails) on guitar and backing vocal duties. The writing process continued, and the band entered Rock Garden Studios to begin work on the debut album INTO THE MODERN WASTELAND, with David Kiley (Sunday Flood, Old Nails) taking over bass duties during the recording process. ITMW was released on Record Store Day 2013 with a release show at the infamous Maritime Tavern in Appleton. Shortly after, drummer Mike St. Clair (Scarlet Escape) came into the fold, and a renewed focus took shape. Fast forward to 2015 -after numerous region performances including 3 years in a row at Mile of Music, as well as Octoberfest in Appleton, the band put the final touches on IN THROUGH THE RED DOOR (again with Marc Golde at Rock Garden Studio) with a monster release party in October held at Rock Garden which was filmed for local TV show Rock Garden live. EVERYWHERE I'VE BEEN followed in 2018 and then an acoustic EP called INTO THE HOLLOW was released in 2020 featuring Eric & Marty. Currently the band is working on new songs and preparing for some upcoming live performances.